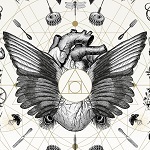 Book online for indoor dining and drinks at The Alchemist in Newcastle from 17 May.

The Alchemist bills itself as “masters in the dark arts of molecular mixology and demons in the kitchen” so cocktail-lovers can expect creations which demonstrate an eye for detail, served up in range of vessels which promise to “add a devilish dash of theatre: they bedazzle, bewitch and set the scene for everything we do”.

Inspired by the region’s history as a frontier of the Roman world, which marked a point between civilised and dangerous lands, staff have come up with some dark and mysterious concoctions to tempt the taste buds.

The food menu, meanwhile, is also offering a twist on dishes which will feature both classic and innovative dishes. Besides British fare, there are echoes of Mediterranean and North American cuisine.

The all-day restaurant is open from early until late at night, serving up coffee, breakfast, lunch then dinner.

Olivia Verde is a local Italian deli based in the heart of Heaton. Offering up...

Riverside, quite literally on the banks of the River Tyne, is a popular Newcastle live...

Louie’s Liquor Store is a modern-day blues saloon situated on the Bigg Market in the...

Vallum is a community of food producers who have gathered together on the family-run farm...

Maldron Hotel is a 4-star hotel in Newcastle city centre which is strolling distance from...

The Stephenson Works is more commonly known as the event venue The Boiler Shop located...

A shop by locals for locals, Local NCL is a casual, old-school corner shop and...