Newcastle is a small compact city and is only a short distance away from Gateshead, making both locations easy to navigate. Discover more here.

Newcastle is a small compact city and is only a short distance away from Gateshead, making both locations easy to navigate. Once you've arrived in NewcastleGateshead, all you need is a good pair of shoes and one of our handy maps and guides!

Make the most of your visit and explore the region by using any of the easily accessible public transport options on offer. From discovering the bustling city centre of Newcastle by foot to hopping on the bus to Gateshead Quayside or taking the Metro to get away from it all in the countryside, travelling around the North East has never been easier. Why not rent a bike to explore the urban art scene in Ouseburn, hail a taxi to sup a cool drink in Jesmond or venture by car to the stunning North East coastline?

There are countless ways to get around NewcastleGateshead to ensure that you have a great time and see what the North East has to offer. Are you a wheelchair user or travelling with children? Visit our page on Accessibility for further information on how you can travel in the North East with ease.

Getting around NewcastleGateshead by Metro 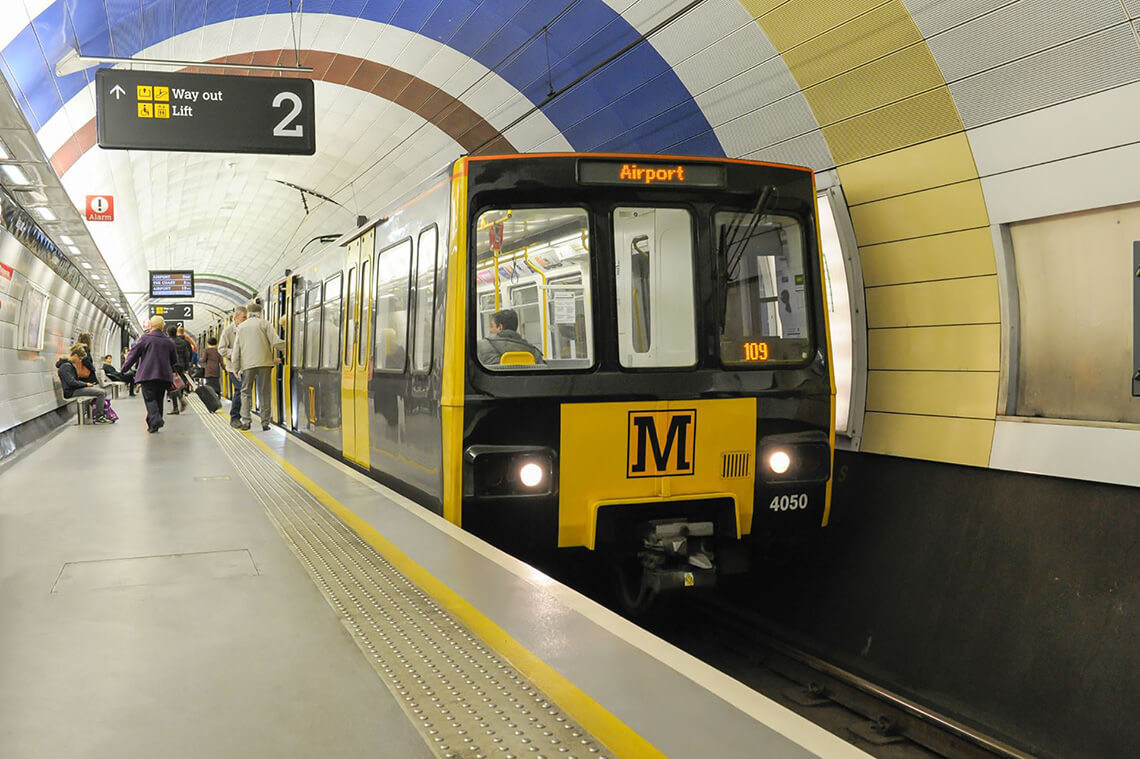 The Tyne and Wear Metro system is great-value and has been rated as one of the country‘s most efficient modes of transport. It’s an ideal way to get around Newcastle and Gateshead as there are regular trains to and from the Airport, Gateshead, the Coast and the nearby city of Sunderland. A short trip on the Metro, which has over 60 stops, will take you to the regions' vibrant suburbs as well as major local landmarks and attractions such as St. James' Park.

All Metro stations are equipped with stairs and escalators as well as lifts for wheelchair users, buggies and commuters with bikes. Buy your ticket at any Metro station before you travel and save money with a Metro DaySaver ticket or Pop Pay As You Go card if you’re making a few journeys.

An all zone single Metro ticket costs £3.60 or an all zone Metro Daysaver with unlimited travel costs £5.00. You can check out full timetable information or a map of the Metro stations by visiting the Nexus website.

Full and up-to-date Metro timetables can be found on the Nexus website. *Depending on route.

Getting Around NewcastleGateshead by Train

Travel by train from Newcastle Central Station to reach some of the region's best sights and attractions outside the city centre. A short seven minute train ride from Central Station will take you directly to shopping heaven at intu Metrocentre, Gateshead. Trains to intu Metrocentre run every 15 minutes daily from Monday to Saturday.

You'll also find regular trains from Newcastle Central Station which take you to the heart of Hadrian’s Wall Country, the nearby town of Durham and to some of the quaint Northumberland villages such as Corbridge, Morpeth and Alnmouth. For more information on tickets and times visit the National Rail website or browse through full details on routes and timetables for London North Eastern Railway.

You can catch a bus from a number of locations throughout the city including intu Eldon Square Bus Station, Haymarket Bus Station, Old Eldon Square or Newcastle Central Station. Gateshead is just a 10 minute trip away from Newcastle on the bus while you can also visit nearby areas such as the Ouseburn, Jesmond and Heaton in under half an hour.

From Haymarket, you'll be able to travel to popular attractions and hotspots further afield like Beamish Museum or Alnwick Garden and Castle, or hitch a ride to intu Metrocentre and the Angel of the North from intu Eldon Square.

Our Quaylink bus service which introduced NewcastleGateshead's first electric buses, picks up at several points to take visitors to the Quayside, Ouseburn area and Gateshead side of the Tyne via the Q1, Q2 and Q3.

Appreciate the sights and be taken directly to Newcastle and Gateshead's attractions with the Go North East Toon Tour city sightseeing bus. Hop on and Hop off to explore more of the city with tickets bought in advance or when you catch the bus.

Many buses are now fitted with contactless payment facilities so you can pay for travel by card; it is still advisable to be prepared and carry change to pay for bus tickets.

There are some great value bus tickets to help you get around NewcastleGateshead fuss-free such as the Newcastle SmartZone, Stagecoach Megarider, Arriva Megarider and Network One Pass. A Tyne and Wear Day Rover ticket also offers unlimited travel (including on Metro and Shields Ferry). You can find out ticket prices or book your tickets in advance on the Stagecoach, Arriva and Nexus websites directly.

If you live or stay outside NewcastleGateshead, don’t cut short your big night out in the Toon! Go North East's Night Bus services (N21 and N56) also run to Sunderland via Washington and Durham via Low Fell and Chester Le Street.

For more information, you can also visit Go North East Times and Fares for schedules and ticket prices.

NewcastleGateshead is extremely easy to explore on foot due to its compact size, however if you need a taxi to get you to where you want to be, there are plenty of companies to choose from, including EastCoast Taxis & Tours, LA Taxis and Uber.

There are 24 hour taxi ranks available across the city with a fleet waiting for you. Pick up taxis at Central Station, Grey Street and Gateshead Bus Interchange for ease of onward travel.

Cycling in Newcastle and Gateshead

Cycling around Newcastle and Gateshead is a pleasant experience for seasoned cyclists and those who simply fancy seeing the city while on two wheels. In NewcastleGateshead and its surrounding areas you will find traffic-free trails, forest routes and long-distance rides which take you through a variety of terrains – what better way to see the region?

There are a number of well-marked cycle paths in Newcastle city centre and Gateshead town centre with safe places to lock up your bike. The Gateshead Millennium Bridge is also cycle friendly and there are paths that will take you to the nearby areas of Gosforth, Jesmond, Heaton and Ouseburn. The Coast is also a great place for budding cyclists to explore or you can head to the Northumberland countryside for country trails and winding roads that will allow you to take in the scenery.

Visitors can hire a bike from The Cycle Hub on Newcastle’s Quayside before pedalling off along the Hadrian Cycleway and C2C routes. Bike hire from The Cycle Hub starts from £10 for 2 hours or £20 for a half day. A full day bike hire at the Cycle Hub will cost £25 and a cycle helmet is inclusive with any hire.

Whether this is your first time in NewcastleGateshead or your 300th time, discover more on foot with the help of expert Walking Guides. Choose from a host of regular walking tours with recommended companies including Newcastle City Guides, Iles Tours and Blue Badge Guides who will lead you through the bustling streets of NewcastleGateshead, point out the award-winning architecture and reveal more of the region's fascinating history and heritage. Join the Newcastle City Guides for a City Highlights Walking Tour which take place daily from 1 June – 30 September, then every Saturday in October. Alternatively, enjoy a self-led tour of the city and download a selection of walking guides and maps to help you get around. If you would like to receive a map by post, please email us.

There are a number of corporate and executive travel options in and around NewcastleGateshead including Parkers Executive Chauffeurs, La Taxis - Corporate and VIP Taxis and EastCoast Executive.

Car hire is a fantastic and flexible way to explore Newcastle, Gateshead and the wider North East region, with a wide range of reliable and well-priced car hire companies available. Visitors arriving into NewcastleGateshead by train will find Enterprise and Europa situated at Newcastle Central Station. Whilst Newcastle International Airport have five national car hire companies based in the terminal who can be contacted 24 hrs every day.

There are multi-storey car parks near The Gate, intu Eldon Square, Eldon Garden and Life Science Centre as well as on-street parking near both Newcastle University and Northumbria University. While many meters will take change-only, increasing numbers of car parks including Dean Street, Manors and Claremont Road car parks accept payment by mobile phone.

You can also find further details about rates, times and restrictions on the Parking in Newcastle or by visiting NCP car parks in Newcastle.

Long stay parking in the city centre is available at Times Square Car Park a short walk from Newcastle Central Station. This car park is open 24 hours a day, 7 days a week and visitors can park from up to 1 hour to 7 days. For more information, visit the Life Science Centre website. Alternative long-stay parking can be booked with Q Park.

Parking in Gateshead town centre is easy and hassle-free. You will find a 24 hour multi-storey car park right next to the shopping complex. This is free after 6pm but can be paid for via cash or card. There is also on-street parking available in Gateshead for a small charge per hour, depending on your location. Most meters will take cash payments and will not charge on Sundays or Bank Holidays however some will also take payments via mobile. You can find further information on parking in Gateshead on the Gateshead Council website.

Using the Shields Ferry in NewcastleGateshead

Voyage across the mouth of River Tyne with a swift seven-minute ferry crossing between North Shields and South Shields. Services run every 30 minutes in each direction.

Maps and guides for Newcastle and...

It is always handy to have a map with you when you’re visiting somewhere new... 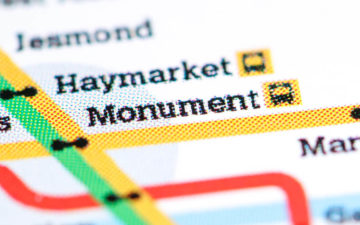 Are you planning a trip to NewcastleGateshead? 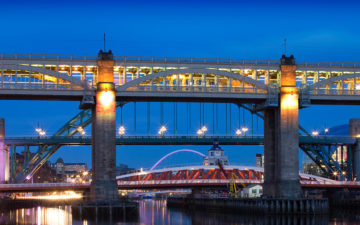 It is quick and easy to get to NewcastleGateshead, whether you're travelling by car, train... 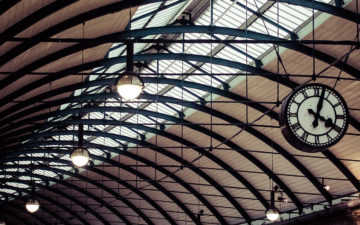