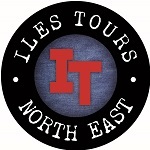 Iles Tours will take you deeper into the history and heritage of Newcastle and its surroundings when you book a guided walking tour. The expert tour guide will take you on a journey into the fascinating stories that have shaped England's unique history, people and culture for over 2,000 years and are still unfolding today. You'll have fun, learn new things and come away with a great story to tell after you have experienced a guided tour by Iles Tours.

Roman Two-Hour Tour - Discover the ancient Roman fort on the frontier of the Roman Empire with a visit to Segedunum with this two-hour tour. Book here

Roman Newcastle and Hadrian's Wall Half-Day Tour - Discover how soldiers lived on the frontier of the Roman Empire with a visit to the eastern end of Hadrian's Wall and its ancient Segedunum Roman fort. Book here.

Relax, unwind and discover the fantastic range of arts and design on show in the...

NE1 Screen on the Green

After a lengthy, multi-million-pound restoration, Newcastle's City Pool and Turkish Baths are both now fully...

Monument tours will resume in Spring 2023 and if you check this page or follow...